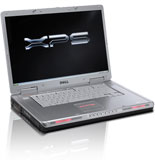 Buying a Dell made me needlessly angry. I ordered a Dell XPS M1710 on August 24th. Every day I went into the site and the arrival date would increment by one, the staus would always stay at order received and the production date would always show that day. After a week of that, I was getting pretty frustrated because it looked to me like nothing was happening. So I tried calling, navigating through voice mail menus and I finally talked to someone who told me exactly what the web site was telling me. So very useful. So then that night I got the idea to email the guy who helped me out with my last Dell order to ask him to look at my order. I got an out of office reply from him saying that he’d left the office for the day and would be back tomorrow. Then first thing this morning, he replies telling me that I should make sure when I order from now on to put in his online extension number when I’m ordering so that he can take charge of the order. I logged into the order checker and bam, my order was shipped two days before (30th on Dell’s system 31st on Purolator’s) and built on the 26th. I think I got lost in the system. So the moral of the story is that it pays to have someone on the inside and that throwing a temper tantrum won’t do anything because Dell support is immune.