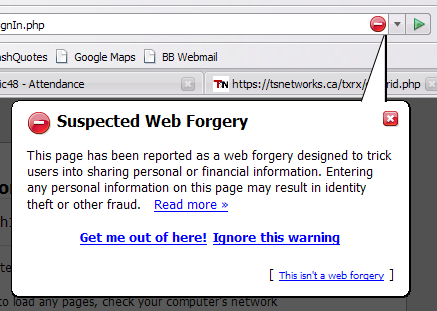 I was going through my junk mail and found a phishy message, so I decided to click on it. Maybe because I thought eBay got my email address wrong, or maybe because I was actually worried that they suspended my account, but mostly because I wanted to see how this new Firefox feature handled it. Though it didn’t let me get to the site, because the server was down or something, Firefox 2 did catch the address I was at as a phishing URL and told me so. I’m enjoying this new version. The built-in spell checker for web forms is great too. It would be cool if it could ignore HTML/code somehow though.