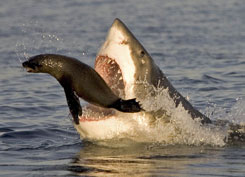 Have you watched any of this Planet Earth series by the BBC? It’s full of the most amazing footage. CBC Newsworld ran the first five episodes near the end of the summer, and we thought that was it, but Greg was looking around online and found out that there’s eleven in total. I shot off a quick email to the CBC and then got a prompt reply telling me that the full 11 episode series will be aired in 2007, starting January 18th on CBC Newsworld. Very cool. I’m sure if you really want to see it before then though, you could download one of the torrents as BBC is airing the whole series now.

In my own documentary making, I caught a mouse today. He’s been hanging out under the receptionist’s desk lately and as I walked in the door I was told. So, being the experienced mouse catcher that I am, I cornered him, and chased him into a box. I let him go outside in a field, where I’m sure he’ll live happily ever after.