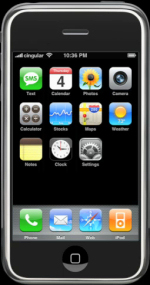 At Congress, same ol’ same ol’, but the big news today is Apple’s new iPhone. The phone itself looks cool, and boasts cool features, but there’s some serious potential there. It runs OSX on the phone and has 802.11 b/g WiFi built-in. Since it’s also a phone, you have the “EDGE” network at your disposal too. By combining those two, you’re technically going to be able to make it so that your phone rings a VoIP application if you’re around a WiFi access point and if you’re not, the call could roll over to the edge network and get you when you’re not. It would mean that I’ll have to switch to Rogers if I wanted to get in on this, but I think I’ll wait until they iron out the kinks in the system. For example; if the iPhone scratches as well as my iPod, I don’t want one.